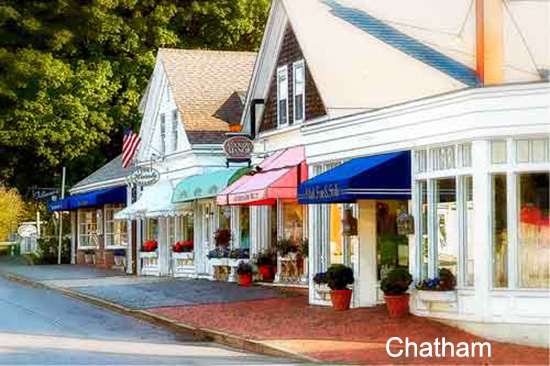 Chatham is a seaside town at the southeastern tip of Cape Cod. Bringing kids? Check out calm beaches like Cockle Cove Beach and Harding’s Beach. If you’re looking for stunning scenery, however, try Chatham Lighthouse Beach. Its tides can be strong (heed the posted warnings), but it’s one of the most beautiful beaches on the Cape, near the landmark 19th-century Chatham Lighthouse. The Chatham Railroad Museum exhibits model trains and train artifacts in a former depot dating from 1887. To the south, Monomoy National Wildlife Refuge provides a vast habitat for migratory birds. Chatham has a beautiful downtown with shops, galleries, the Orpheum theater, and plenty of dining options.

Southeastern Massachusetts, at the “elbow” of Cape Cod. Bordered by Pleasant Bay and Orleans on the north, the Atlantic Ocean on the east, Nantucket Sound on the south, and Harwich on the west. Chatham is 17 miles east of Hyannis, 89 miles southeast of Boston, and 223 miles from New York City. Town offices are located at 549 Main street, Chatham, MA 02633. The main number is 508-945-5100.

Kate Gould Park on Main Street
Chatham
Every Friday evening at 8:00 pm from July 3 to September 4