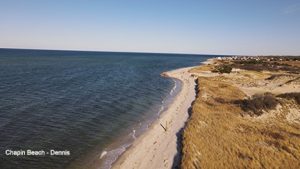 The quiet, beach-oriented nature of Dennis perhaps derives from its namesake, the Reverend Josiah Dennis, pastor of Yarmouth’s East Parish. He would probably approve of the town’s lack of commercial development, its ten town beaches, and seven conservation areas. Rev. Dennis’ saltbox home, the Josiah Dennis Manse, is open to the public with rooms decorated in the style of the minister’s day. Further along Route 6A on Scargo Lake is Scargo Hill Tower built on the highest spot in the area at 160 feet above sea level. From the top of the 38-step tower, you can see from Barnstable Harbor to the west to Provincetown in the east. Also on Route 6A is the Cape Playhouse, converted in 1927 from an 1820 Unitarian Church. Basil Rathbone, Bette Davis, Gregory Peck, and Henry Fonda are among the famous actors who have graced the boards. Also on the grounds, the Cape Museum of Fine Arts houses a collection 500 works by Cape-associated artists. Also nearby down Corporation Road is Dennis’ best known beach, Corporation Beach. Named for a packet landing owned by a corporation of townspeople, the white sand beach surrounded by low dunes is open to the public. Dennis’ hiking trails, all open to the public, include Crowes Pasture Conservation Area off South Street at the end of Quivet Cemetery in East Dennis, and the 87 acre Fresh Pond Conservation Area off Route 134.

Southeastern Massachusetts, on Cape Cod. Bordered by Cape Cod Bay on the north, Brewster and Harwich on the east, Nantucket Sound on the south, and Yarmouth on the west. Dennis is 76 miles southeast of Boston and 260 miles from New York City. Town offices are located on Old Main street, P.O. Box 1419, South Dennis, MA 02660-1419. The Main number is 508-394-8300.