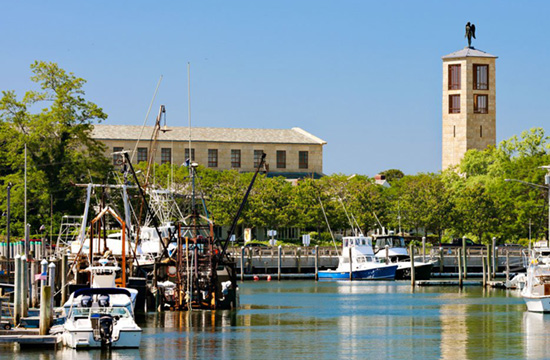 The Town of Orleans, incorporated in 1797, is a resort community on the outer Cape whose European history begins in 1642 with the first permanent settlement established by Nicholas Snow and his family. Settlers had purchased rights to the town from Mattaguason,sachem of the Manamoyick Indians. The Colonial economy was built on agriculture, especially corn, rye and wheat, plus the growing of hay and vegetables. In the 18th century, commercial fishing and shellfishing supplemented local incomes and residents worked on herring boats and went after whales. By the 19th century, coastal packets from Boston were being serviced and several windmills created power resources in the town, but residents heaviest reliance was on cod and mackerel fishing. Lifelong residents recall that in those days, the very old and the very young farmed, while all the able-bodied men fished. Fishing in Orleans declined as competition from larger boats and larger ports grew, but the town had established a commercial importance on the Cape as a market center for other communities, that continues into the 20th century. Small businesses, like the Mayo Duck Farm that produced 50,000 ducklings in 1918 were welcomed by the town, but the major modern change in Orleans was spurred by the impact of summer development. This resort home development, which accelerated between 1915 and 1940 and still continues, has had the greatest effect on the town and in turn has supported increasing commercial development along Route 6.

Southeastern Massachusetts, at the elbow of Cape Cod. Bordered by Eastham on the north, the Atlantic Ocean on the east, Chatham and Harwich on the south, and Brewster and Cape Cod Bay on the west. Orleans is about 22 miles from Hyannis; 88 miles southeast of Boston; 93 miles east of Providence, Rhode Island; and 270 miles from New York City. Town offices are located at 19 School Road, Orleans, MA 02653. The main number is 508-240-3700.